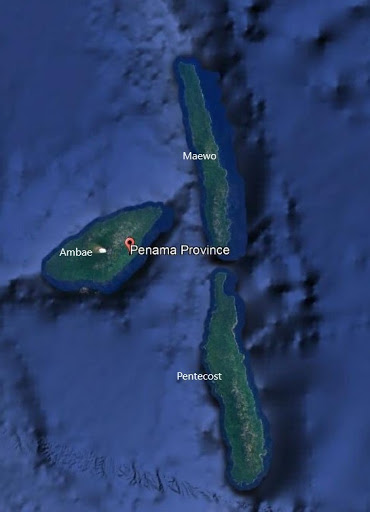 In collaboration with the Health Promotion Unit in Penama Province, the Butterfly Trust has been supporting a long-term programme in community health education. The project has been trialled on Ambae, one of the three islands making up the Penama Province, since 2015. Led by the Health Promotions Officer (HPO), Village Health Workers (VHWs) and chiefs of Lolovoli, Lolomanada (which includes Lovanda), and St Barnabas villages, villagers have focused  on improving sanitation facilities, understanding good nutrition, promoting healthy kakae (food), and reducing the rates of infectious diseases.

(The programme was interrupted by the eruption of the Manaro-Voui volcano on Ambae in 2018, but as of June 2019, 62% of the population of Ambae had returned following compulsory evacuations in the last quarter of 2018 after the eruption. Some residents sought permanent refuge in second homes, primarily on the main hubs of Santo and Efate, and to a lesser extent on neighbouring Maewo and Pentecost. The number of displaced Ambaeans, returning from temporary shelter, is expected to rise to approximately 80% of Ambae’s pre-eruption population of 11,000.  In December 2019, the government, through its Council of Ministers, finally authorised a full resumption of essential services to Ambae while simultaneously working at relocating its Provincial Headquarters to Pentecost.)

Markson Tabi, Penama’s HPO, is responsible for running the programme. Click on the link to view his latest report – HPOs Report Ambae 2019

Key results of the programme as outlined in Markson’s report are: 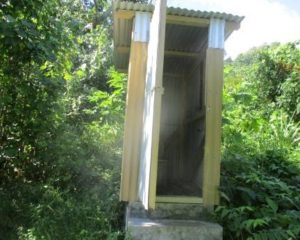 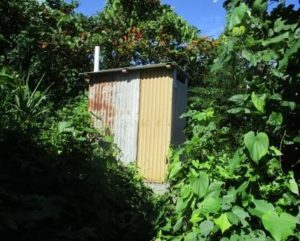 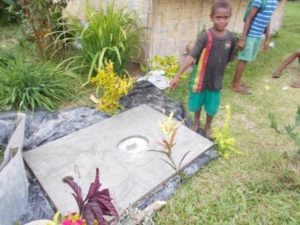 Compared to bush toilets, which are more exposed and constitute breeding grounds for flies and other pests, these VIP toilets allow for waste to decay in contained spaces, minimising environmental effects and odour. (VIP is shorthand for “ventilated improved pit” toilet.) 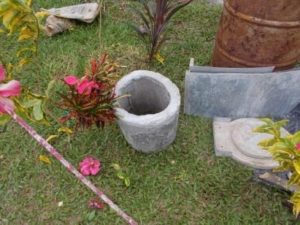 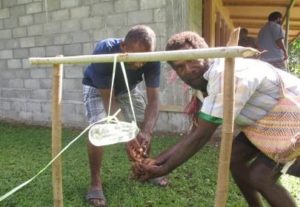 The step up from bush toilets to VIP toilets should reduce the passing of some infectious diseases (also known as communicable diseases). Note the “tippy-tap” for handwashing (right). 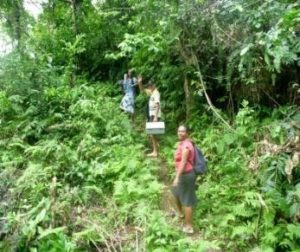 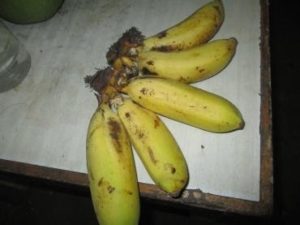 Organic island kakae (food) is collected from gardens in the bush and used to make fruit platters (below left) and simboro (below right). 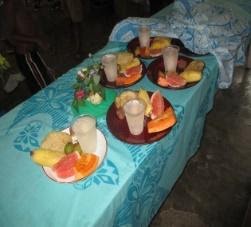 The MOH is encouraging consumption of island food to combat increasing levels of diabetes and heart disease, caused in part by processed foods.

Another recent achievement is that one of the communities making up the village of Lolomanada, Lovanda, has been selected by Penama Provincial Health to be a “Model Healthy Community”, the first in Penama province. The award of this title took place on 27 January 2020. Following training delivered under the programme about the risks of smoking and drinking alcohol, Lovanda has also declared itself a tobacco free community and has restricted the drinking of alcohol. The community leaders have drafted their own guiding principles  in keeping with their “Model Healthy Community” status. Click on the link to read a copy of those principles (note that “shell” means “sell” and “strictly shell” means “forbidden to sell”) – Lovonda Policy for Healthy Community.

This year, Lovonda is aiming to build more public toilets and handwashing stations at the church, nakamal and sports ground. Community leaders have also requested further practical training to be integrated during the construction of these facilities to reinforce the skills needed by families to erect their own sanitation facilities at home. Funds are needed to purchase cement, wire, buckets, taps, building consumables and truck costs for transporting coral and sand.

Markson is keen for the programme to continue. For it to be effective he will need more funding for transport (which is very expensive in Vanuatu), training for the VHW’s, the construction of more sanitation facilities, and he also wants to introduce the programme to the other islands of Pentecost and Maewo.

Please help Markson and his community teams carry on their excellent work by donating to the Penama Community Health Programme.