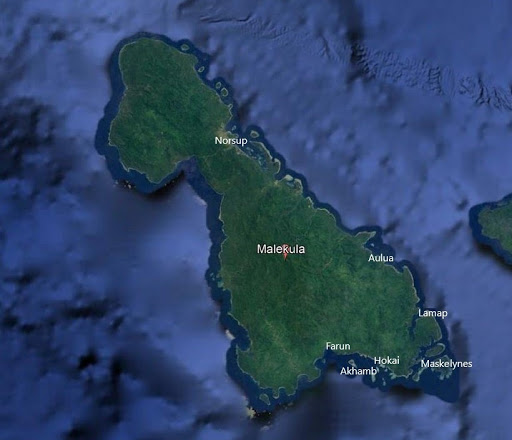 Known for its geographical similarity to a sitting dog, Malekula is one of the larger islands of Vanuatu and is situated near the centre of the archipelago. (The Maskelyne Islands are situated just off the southeast corner of Malekula and are considered a part of Malekula.)

Over the years, the work of the Butterfly Trust in Malekula has expanded to include more and more villages. The work has concentrated mostly on health and education, including health education, but also involved “build back safer” training after Cyclone Pam in 2015 and cyclone recovery work after Cylcone Harold in 2020.

Much of the work has been centred on the Lamap Health Centre and the provincial hospital at Norsup and has included the establishment of a dental clinic at Lamap.

(To see historical records of the work of the Trust in this community, click on this link to the Newsletters tab.)

Much of the work of the Trust in south and central Malekula was disrupted due to Cyclone Harold and Covid-19. 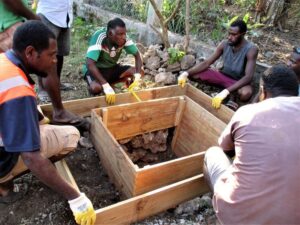 However, as part of its cyclone recovery work, the Trust, in partnership with the Ministry of Health, carried out a programme of WASH (water, sanitation and hygiene) at Vao in northeast Malekula. Much of the work concerned the building of more hygienic toilets. 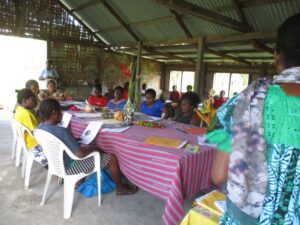 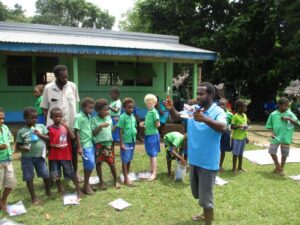 and continued its work throughout Malekula supporting the Health Promoting Schools programme.

The Trust also continued to support the Ikkana Cancer Foundation in its work screening and educating for cervical cancer in Malekula.

The Trust hopes to resume its core work, as illustrated below, in 2021 once the effects of Covid-19 subside.

In 2019, kindergarten to Year 6 students from Sanesup and Kamai schools received follow-up dental education and treatment, in a continuation of similar activities conducted the previous year. Oral health and hygiene instructions, including toothbrushing practice, were re-emphasised, class by class. This time, eye and ear checks were also added to the repertoire. 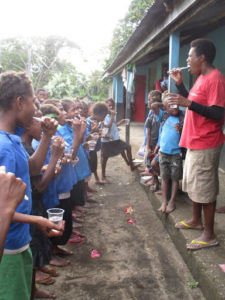 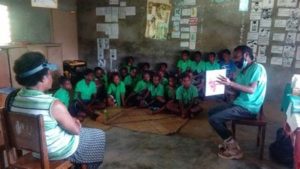 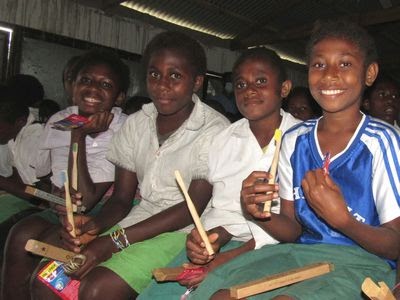 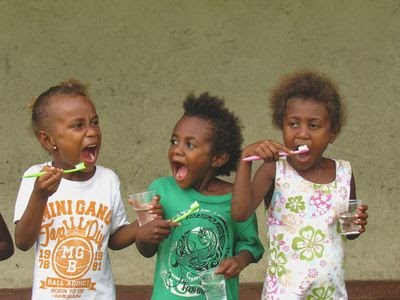 This programme received excellent support from the Aulua Dispensary nurse in-charge, Jelina Kamsel, members of the Aulua Health Committee, teachers from all three schools, and village health workers from the villages of Burbar, Repaksivir and Asherok.

In Lamap, St Pierre Chanel Primary School (kindergarten – Year 6) and College de Lamap (Years 7 – 10) were hubs for dental, eye and ENT activities in June. While dental screenings, treatment and oral health education have been a familiar component of similar visits in previous years, the inclusion of eye and ENT nurses for the first time was a valuable addition to the programme. 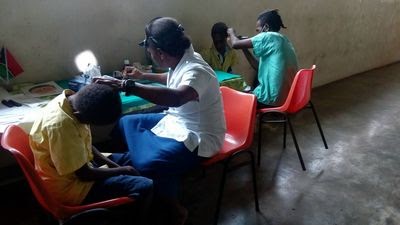 Dr Kalbule Willie, resident doctor at Lamap Health Centre and aspiring eye specialist, provided back-up due to last-minute staffing changes. Tooth extractions and fillings were carried out at the dental clinic at the health centre.

Also in 2019, fresh from successful assignments around Northwest Malekula, Max Albert, founder of Ikkana Cancer Foundation, joined the Trust team in Lamap and Aulua to promote awareness of cervical cancer in several village communities, targeting both women and men. In Aulua, Max’s engaging style captivated audiences during a series of talks and question-and-answer sessions at the communities of Vartavo, Asherok, Burbar and Lanvitvit. He was supported by Jeremy, a registered nurse from Lamap Health Centre. 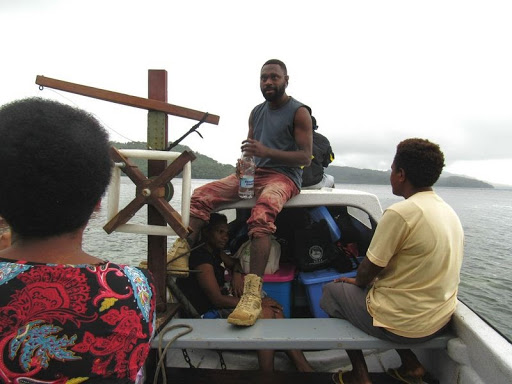 Ikkana’s reach also extended to women in all five sectors in Lamap. Lamap Women’s Committee, led by Carmeline and Agnes Barius, played a major role in mobilising attendees to each presentation while the Butterfly Trust provided the resources and coordination support. The ensuing joint efforts of Lamap Health Centre staff, Max’s clinical and support team, and the

Max from Ikkana travelling with the outreach team

Women’s Committee, ensured that the week-long cervical cancer screening operation ran smoothly. Max returned to South Malekula in late December 2019 to follow through with the screening results as well as present another round of awareness talks, this time in the Maskelynes. 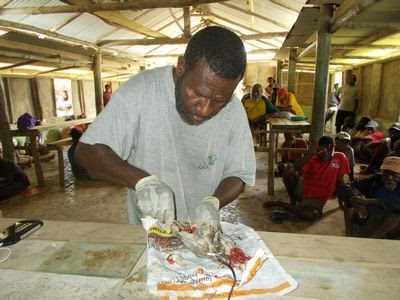 The Trust has an ongoing association with the Neglected Tropical Diseases (NTD) unit of the MOH. In 2019, the NTD Unit and the Department of Livestock gave demonstrations in all five sectors of Lamap about how animals can spread diseases to humans. The national and provincial Livestock Officers gave lively presentations in each sector, which included animal dissection to illustrate the presence of parasites. The Trust organised these activities to coincide with the other health events taking place at the same time. 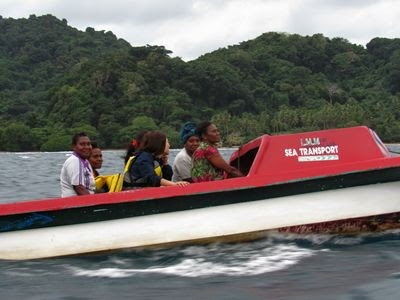 Outreach work in 2019 also extended to the remote, southern villages of Hokai, Farun and Akhamb.

A previous dental outreach to this region of South Malekula took place in 2017 when a mixed team of New Zealand volunteers and local health practitioners were based in the villages and dispensary on Akhamb Island. In 2019, it was Hokai’s turn to provide a base.

Outreach team on the move 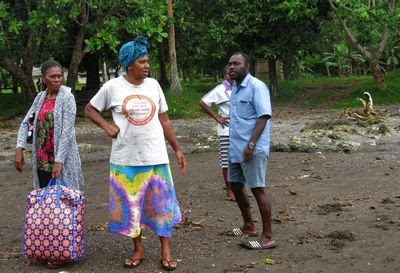 Logistics manager, Agnes Barius (above) and French nurse, Camille Berthoux, at Hokai (below) 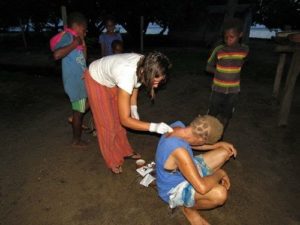 Activities ranged from community and school-based awareness on general hygiene and oral health, to nutrition and NCDs, to student BMI checks. A rotation of dental, eye and ENT screenings was conducted at several schools and kindergartens at Hokai, Farun and Akhamb. Adult eye and ENT screenings, and a series of community presentations on a range of health education topics, were organised for each community in turn. 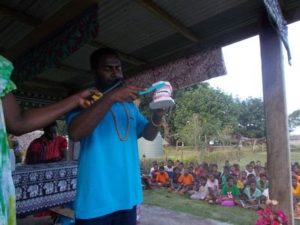 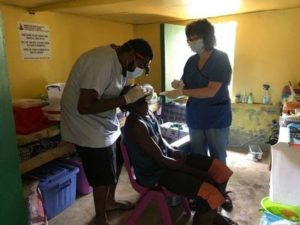 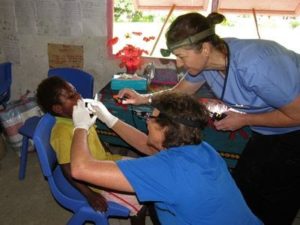 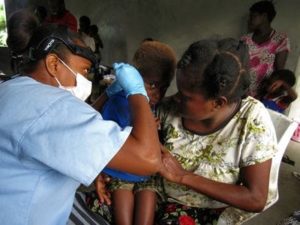