Rireana spent another cyclone season in Vanuatu over the 2018/2019 cyclone period. After she finished her work in 2018, she was hauled out on the railway (by a winch mounted on a tractor) at the Port Vila boatyard, stripped of all her deck paraphernalia, and lashed down to large concrete blocks embedded in the ground. Luckily there were no major weather events and she remained on the hard, unscathed, until we re-launched her at the end of April 2019.

After all the maintenance work was completed (on the hard and on a mooring in Port Vila Harbour) we sailed north to support the Trust’s programmes in Malekula. At various times Rireana was anchored in the Maskelyne Islands, Port Sandwich, Port Stanley and at Banam Bay.

Next it was onto Espiritu Santo to re-provision and attend to some maintenance matters, including broken fuel return lines from the injectors. We spent time at anchor in Surunda Bay and Aese while waiting for a weather window to sail out to Ambae and then south again. Unfortunately, at this time, we heard Dave’s mother was ill back in New Zealand, so after looking at all the possibilities, decided the best thing to do was sail back to Vila as fast we could. So we bashed our way south, placed Rireana on a mooring at Blue Marlin in Port Vila Harbour and two days later flew back to Auckland.

Due to the fact we needed to spend a lot of time back in Auckland, two friends then sailed Rireana back to New Zealand for us. This was something we had been thinking of doing anyway in order to re-power Rireana. So after arriving at Opua in the middle of November, following a voyage notable mainly for its lack of breeze, Rireana is now back in Aotearoa.

Like most years, where Rireana sails next is uncertain, but there are a number of possibilities afoot. 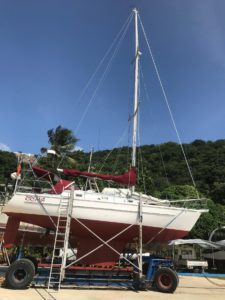 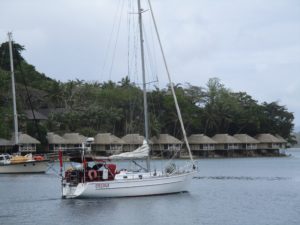